We've got your questions covered!

Who's the right person for my finances?

What is a financial coach?

Why is a Financial Coach important?

Why hire a Financial Coach?

What kind of coaching are we talking about?

Will Maplewood Financial coaching work for me?

What should I expect meeting with a financial coach?

What is Destination Trax™?

Do you offer courses and coaching to churches?

I own a company and would like this for my team, do you have bulk pricing?

Who’s the right person for my finances?

Before I dive in, let me set the stage for what you will see. And, please bear with me, it’s a bit technical, BUT super important for you to understand.Static ReturnsInvestment outcomes in the real world are the result of a near-infinite set of variables, but advisors should try to create the most real-to-life scenario for you as possible by including the testing of what I refer to as “market dynamics.” Market dynamics are compared to the static returns commonly used by advisors in the examples I use. I have found that the assumptions of static returns can lead to a false sense of confidence as it relates to a client’s future because they create a perfect scenario. I believe that by using a past market that is dynamic in nature, you can more closely align future expectations. This is done by taking a stretch of historical performance data (like S&P 500 performance from 1970–2014) and overlaying each year through the course of your expected returns. In other words, the performance of 1970 becomes the illustrated performance of your first year of the plan, and so on. If the illustrated plan happens to be longer in years than that of the historical data, the original first year of performance then picks up where the data leaves off. For example, you illustrate 30 years in your plan but choose to use performance data from 2000–2009. In this case, the 11th year of the plan uses the performance of the year 2000 again and continues as it did in the first cycle.The reports shown on the next few pages are identical (meaning they are the same client) except for the comparison of a static vs. a dynamic environment. The static rates are derived from the same average return found in the dynamic period, which is illustrated separately and comparatively.All other numbers in each scenario are equal, including fees, inflation rates, beginning account balances, withdrawal rates, tax brackets, and distribution order of each account, so they are compared static against a dynamic environment. 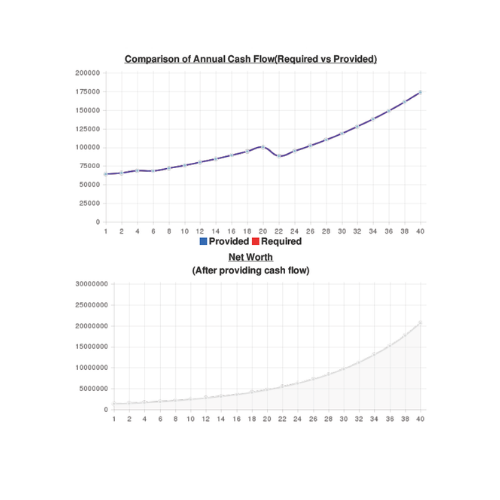 As you can see, the resulting net worth is over $20 million, which would certainly warrant estate planning like a QPRT (qualified personal residence trust) and/or an ILIT (irrevocable life insurance trust).

As fun as this sounds to those who offer legal advice or sell insurance, let’s see what happens when we add the impact of the market dynamics overlay on the next chart. 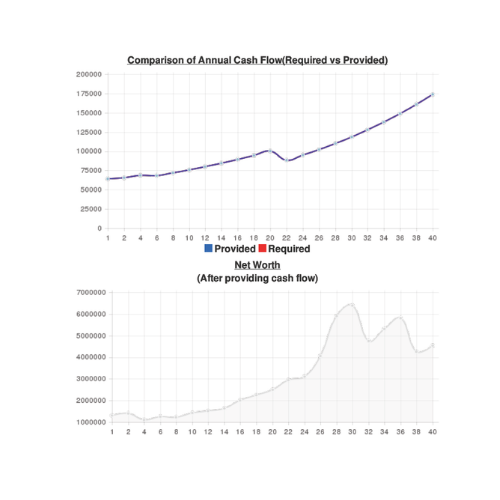 The outcome is dramatic even though the same average return exists in the mix. Now you have an ending net worth less than $5 million, which doesn’t even exceed the available unified credit equivalent by today’s Internal Revenue Code (meaning you don’t have an estate tax problem and you don’t need to buy an expensive solution to a problem that likely doesn’t exist). Now you have an ending net worth of $1.8 million. We have demonstrated prudence with conservative performance, and we have something that both the advisor and client can be happy with. That’s more accurate and fair, right? Not exactly.The first indicator that it’s not accurate is the smooth acceleration and deceleration of net worth. Since when is anything smooth in the world of money? 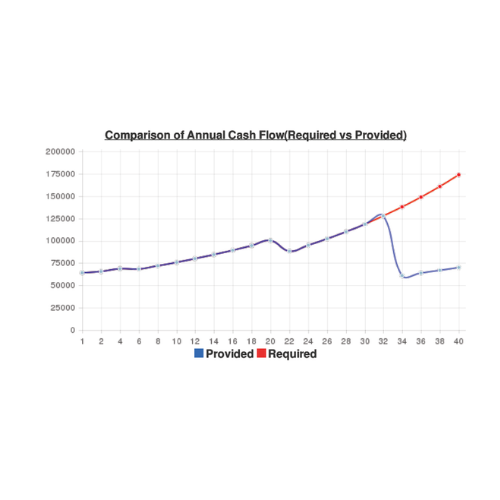 By comparing the previous chart to the application of market dynamics in the chart above, you can see that you now have a shortfall in year 33 of your plan and subsequently zero net worth. Twenty million to broke takes a lot of doing. 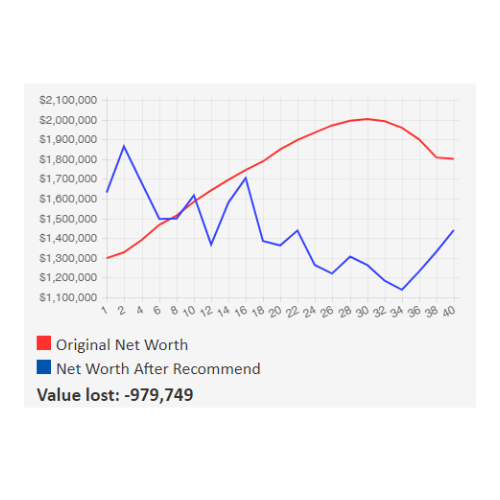 What clients are being shown time and again is a beautiful slope that is psychologically easy to swallow, but the reality is the jagged blue line that (in this case) initially performs better because of the tear the market was on in the early years (1997–1999).But as time rolls on, you can see the effects of volatility as opposed to the beautiful static and conservative returns, even though they are the same average. And the difference of almost $1 million (just comparing the last scenario) is enough to warrant additional work with holistic planning. Without this understanding, the advisor’s work stops at a seemingly solid scenario ($20 million) that clients just like you are happy with – at first.I hope you’re starting to see how broken traditional financial services are and that what is being prepared for clients like you is faulty both by the software that is used and the philosophy of the planner constructing the plan. So, to answer the nagging question, who is the right person for your finances? I would say you are. But, if you are like most people, you need a coach to help you navigate the field until you are empowered to stand on your own two feet without someone charging you the equivalent of what it takes a lifetime to save. I know this was a bit technical, but I believe that you are fully capable, so I really hope you take the time to understand it. I am here for you! If you need clarity on this or what your next steps should be, let’s meet! Click the button below to schedule a FREE Strategy Session

What is a financial coach?

Why is a Financial Coach important?

Traditional Financial Services is the least trusted of all professions in the USA. People are tired of:

Americans now know that products and performance have very little (10%) to do with what REALLY builds wealth. It’s the habits and behaviors that precede the decisions they make (the 90%) that TRULY builds wealth and Financial Coaching is exactly what’s needed to remedy the Great American Household Financial Crisis.

Why hire a Financial Coach?

Financial Coaches get paid for results not from selling a product. There are many alternatives to build the financial know-how and emotional capacity needed for financial freedom, but they pale in caparison to how a Financial Coach can set you up for success.

Going a different route leaves you learning trial by fire. And, unless you’re a professional student, that’s not the way you want to go about building REAL and lasting financial change.

What kind of coaching are we talking about?

There are two types of coaching we offer:

Informational coaching is the knowledge you need so you can think critically for yourself for every part of your financial life.

Transformational coaching is intended to focus you on the answers and resources you need now, mastery of your mindset so you can put limiting money beliefs behind you and, gives you someone you can be accountable to until your new financial habits and behaviors are stable.

Will Maplewood Financial coaching work for me?

It works if you have any kind of income and have the desire for financial independence.

If the world of personal finance is brand new to you, the courses are simple enough to follow with analogies and stories.

If you’re just beginning in finance and need a path to break out of the gate so you start to have a little financial wiggle room then this will work for you.

If you’re a typical family that owns a home, has some debt you contend with, maybe have had some frustration getting a straight answer for the direction you should go in, you’re gonna love our coaching because I’ve seen people work with me over a ten-year period of time while their income stayed relatively flat, but watched their net worth increase over $500,000 executing these strategies. That is financial independence on an average income.

Even if you think you have a handle on personal finance, I’ll say that I’ve had successful veteran financial advisors go through my coach training and they got something out of it. If they can, you can too.

What should I expect meeting with a financial coach?

Typically, you will work through a series of self-paced online courses at the same time you will receive personal attention each step of the way. The coursework covers every aspect of your finances, the goal of which is two-fold:

Essentially, when we are finished, you will have much the same competency that the average financial advisor does… saving you tons of money on advisor fees, predatory selling, or bad financial decisions.

Going a different route leaves you learning trial by fire. And, unless you’re a professional student, that’s not the way you want to go about building REAL and lasting financial change.

Do you offer courses and coaching to churches?

Yes we do! Please email us at kenneth@MaplewoodFinancial.com with your inquiry and we’ll get back to you.

I own a company and would like this for my team, do you have bulk pricing?

We do. If more than 10 people from your company want to enroll, reach out to kenneth@MaplewoodFinancial.com and let us know how many people want to take the course and we’ll get pricing quoted for you.

We are here for you!